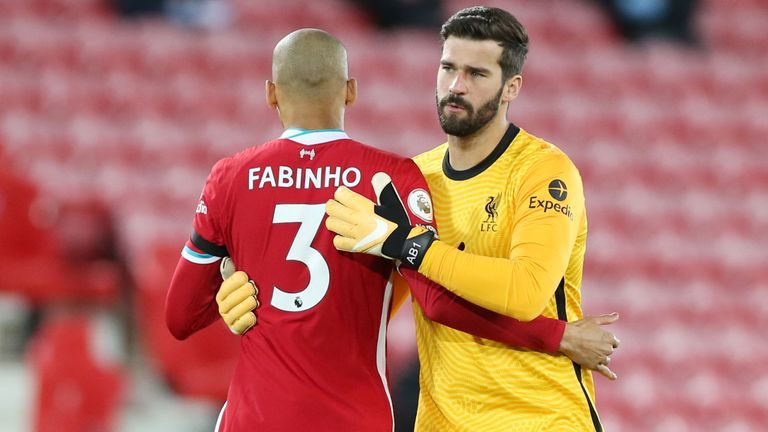 Liverpool’s Brazilian duo Fabinho and Alisson are expected to miss out on their Premier League match against Watford on Saturday.

Both are in the Brazil squad for their clash against Uruguay at 1.30am on Friday Nigerian time, which kicks off just 35 hours before they are due to play on Saturday at 12.30pm.

Watford had reportedly snubbed a Liverpool request to move their meeting to an evening kick-off.

Midfielder Fabinho revealed that due to the quick turnaround, he and goalkeeper Alisson might struggle to make it to Watford in time, according to SkySports.

“I believe that this first match against Watford, it will be very hard for us,” he said. “I don’t think we’ll play. Neither Alisson nor myself.

“With all of what is involved with travel, I don’t know how much time we’ll have between one game and the other.

“I believe that we won’t be playing.”

Liverpool will look to leapfrog Chelsea into first place on the Premier League log when they face Watford at Vicarage Road this Saturday.

Foden set to sign new six-year contract at Manchester City
‘I am so young,’ Ranieri says as he prepares for first Watford outing
Change Language »