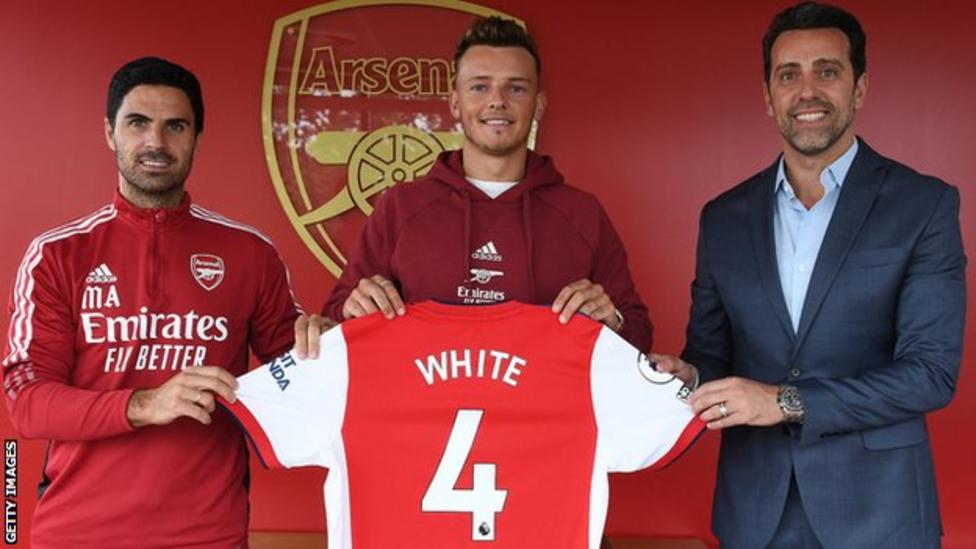 The 23-year-old, who was a late call-up to Gareth Southgate’s England Euro 2020 squad, has agreed a long-term contract at Emirates Stadium.

The Gunners agreed a deal in principle last month with the move completed following White’s return from holiday.

“Ben was a top target for us and it’s great that we’ve completed his signing,” manager Mikel Arteta told the club’s website.

“Ben is an intelligent defender who is very comfortable with the ball at his feet and his style fits perfectly with us.

“And of course, he is still young, so his age and profile fits with what we are building here. We are all looking forward to Ben being central to our future long-term plans.”

The transfer completes a meteoric rise for the defender, who was released by Southampton as a teenager before being signed by Brighton in 2016.

He spent time out on loan at Newport and Peterborough before joining Leeds on loan for their Championship-winning season in 2019-20.

White’s performances at Elland Road attracted interest from a number of clubs, including Leeds themselves, but the defender instead signed a new four-year contract with the Seagulls last September.

That deal put Brighton in a strong negotiating position this summer and it is understood they rejected two bids from the Gunners before agreement was finally reached amid interest from other Premier League clubs.

White earned his first call-up to the England squad as part of Southgate’s provisional 33-man squad for Euro 2020, appearing in warm-up wins against Austria and Romania.

He was initially among the seven players cut from the final squad before returning as a replacement for the injured Trent Alexander-Arnold, though he did not make an appearance at the tournament.

White is Arsenal’s third signing of the summer following the arrival of midfielder Albert Sambi Lokonga from Anderlecht and left-back Nuno Tavares from Benfica.

White will wear the number four shirt at Arsenal, which was vacant after the exit of defender David Luiz.

•Text (except headline) from BBC.