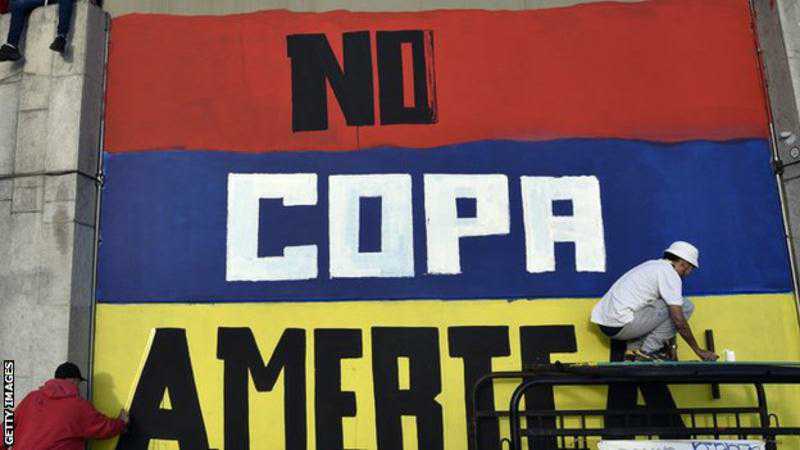 Argentina becomes sole host as Colombia will no longer co-host the 2021 Copa America after a series of protests in the country.

The tournament was set to be held between Colombia and Argentina for the first time in its 105-year history.

There have been widespread protests against the government in Colombia, with demonstrators disrupting some Copa Libertadores matches.

The final of the 10-team tournament, which runs from 13 June-10 July, was due to be held in Barranquilla.

The South American Football Confederation (Conmebol) took the games off Colombia after previously rejecting a proposal to move them to November, saying it was “impossible”.

“We guarantee the realisation of the 2021 Copa America and in the coming days will inform on the relocation of those games that were to be held in Colombia,” Conmebol said.

Protests have been ongoing in Colombia since April after the government tried to implement a controversial tax plan.

The proposal was revoked but protestors have continued to demonstrate against police brutality, poor wages and a lack of opportunities for young people.

A number of continental cup matches have been moved from Colombia to Paraguay and Ecuador because of the protests.

Colombia has also been hit hard by the coronavirus pandemic, with the death toll surpassing 83,000 this week.

Argentina is under a strict lockdown until 31 May after a new wave of cases in the country.

Brazil are defending champions from when the tournament was last held in 2019.