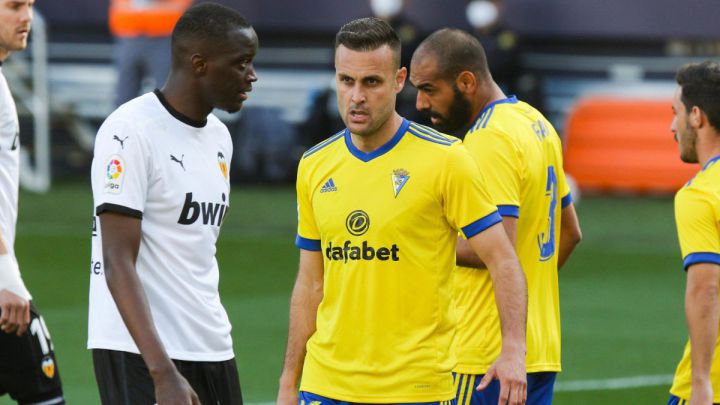 La Liga announced on Friday it has found no evidence to support the allegation that Cadiz player Juan Cala directed a racist slur towards Valencia’s Mouctar Diakhaby during Sunday’s match.

Valencia and Diakhaby accused Cala of using derogatory language at the French player during the encounter and Valencia players briefly walked off the field in protest.

After the match, Valencia president Anil Murthy blamed Cala in the incident but following an investigation — one that included an examination of match video, audio review and the aid of lip reading — La Liga concluded there is nothing to support the claim of racist abuse.

A La Liga statement read: “La Liga has notified to the clubs involved and to the corresponding authorities the result of the investigations carried out to resolve what happened between the Cadiz CF and Valencia CF players.

“After the analysis of the elements, it is concluded that no evidence has been found in any of the available media in La Liga that the player Juan Torres Ruiz [Juan Cala] insulted Mouctar Diakhaby in the terms denounced.”

Cadiz released a statement after the game saying the club was “against any manifestation of racism or xenophobia, regardless of who the perpetrator is” but did not mention Cala.

Cala denied those allegations in a news conference on Tuesday and called the aftermath a “media circus.”

Following the announcement, Valencia released a statement and said the decision does not change their stance on what happened during the game.

“The fact that no evidence has been found does not mean that it didn’t happen,” it read. While Valencia CF wants to highlight that La Liga has carried out its own investigation, in no case does this change the club’s view regarding what happened during the game and maintains its full support to Diakhaby.

“Our aim is to see a change, to see an appropriate response to such a grave incident, to see a movement to change the regulations and attitudes when facing these types of problems that may arise. It was an unprecedented episode in football, but we are convinced that it will serve to promote a real change in the regulations.

At this point, it is necessary to continue working with La Liga, the institutions and the rest of the clubs to ensure that these types of racist incidents are never repeated.”

While La Liga has found no evidence, the Royal Spanish Football Federation’s competition committee opened an investigation into the alleged incident earlier this week and will have La Liga’s report to refer to.

Diakhaby, who did not return to the pitch after the incident and watched the game instead from the stands, said he was “very hurt” by the incident and thanked his club and teammates for their support.

La Liga insisted it is committed to “permanently” combat racism in the sport.