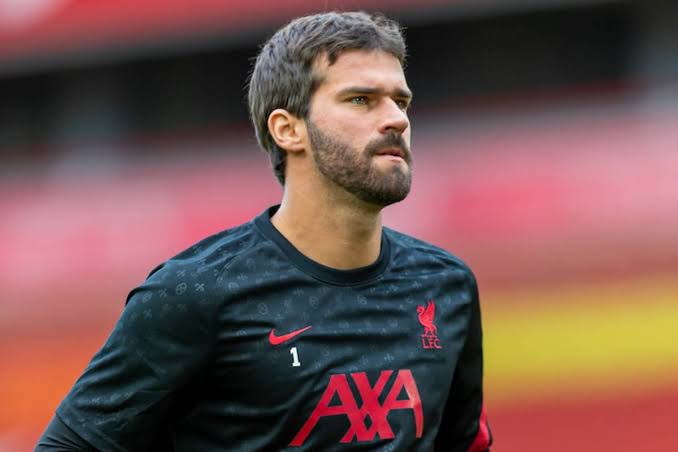 oma Akatugba
Liverpool goalkeeper, Allison Becker has given updates on his fitness ahead of the Reds’ clsh with Danish champions, FC Midjtylland.

Becker has been out injured for more than three weeks now.

In an interview with journalists ahead of the Champions League fixture at Anfield, the Brazilian said he had to change the ideas of the team’s doctor as they worked hard to ensure he got fit earlier than projected.

speaking on how it feels to be back, Becker said: “It’s good to be back first of all. I am really happy. I tried to give my best and I have the top physiotherapists on my side as well, helping me to accelerate the recovery process.

“As soon as the doctor told me it would take 4 to 6 weeks, I said to him no doctor, we go to two or three weeks maximum and he agreed with me and we went for it. I am really happy to be back, I just want to thank the physios, the fitness staff, the doctors and the goalkeeper coaches who helped me in this process.”

On how he managed his recovery, Becker said:
“I prayed a lot (laughs). But I also did a lot of treatment session. I was daily fro five-six hours at the club working with the physiotherapists and fitness department and after two weeks being together with the goalkeeper coaches, already doing some catching but no diving. after two and a half weeks, I began to dive and three days before the match I started to work hard with hard shootings, hard kicks, diving as well as full range diving. On Friday I gave the green light to the coach. I believe my faith and obviously, working hard helped me a lot in this first recovery.”

Liverpool will be without talismanic defender, Virgil Van Dijk for not less than six months after he sustained an anterior cruciate ligament injury in a cynical challenge by Everton goalie, Jordan Pickford. Allison said they will miss their star defender but the team has enough quality to stand strong in that period.

“Fabinho is a fantastic player and he is doing very well as a centre back but we would miss Virgil Van Dijk a lot, we can’t deny the fact that we miss him. but we have the players to keep playing the way we play, we do not need to change that but we would miss Virgil because he is one of the best players in the world. When you don’t have those kinds of players on the pitch, you miss them, that’s a fact.”

FC Midjtylland Nigerian midfielder, Frank Onyeka lost his dad but could not go to Nigeria. Allison extended his respect to him and said it’s a difficult position to be in.

“First of all, feel sorry for him (Frank Onyeka), for his loss. It is a difficult moment for everybody. Many people in the world lost their loved ones and could not say a proper goodbye to them.

“This is a tough moment for everybody. Sometimes we just forget a little bit because we are involved in football but football is a way to give happiness for the people in these difficult times. A lot of happiness comes through football that is why we do what we do with so much passion and love. I didn’t see my parents for like 7 months. It was the longest time I stayed away from them in my life but I am happy I have the technology to stay in touch with them, I can call them daily and speak with them but I miss them a lot, I miss my friends as well but everybody is going through something that is not really comfortable and we have to keep faith that things get better as soon as possible.”