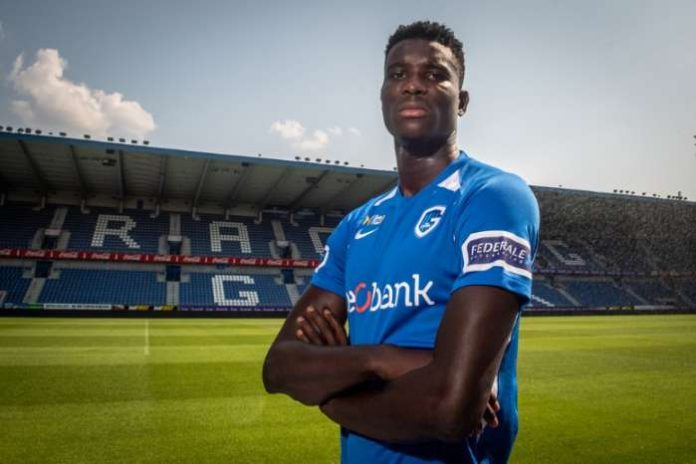 Lanky Super Eagles attacker, Paul Onuachu has revealed a difficult phase of his life that will come hard to forget.

After struggling to get football opportunities, none was forthcoming and he struggled to make a living.

With his parents behind him, his father soon grew frustrated, as he asked him to learn a trade and bring something to the table too.

Disturbed, Onuachu was on his way to start something else with his life when a coach he has once played under informed him about an opportunity.

Speaking with me at the Luminus Arena, home ground of his club, KRC Genk of Belgium, Onuachu gave details of how his career has panned out, his beginning and the things he went through to get to his current position.

“It all started at Ojo,” he told me. Ojo is an area in Lagos State known to be mainly inhabited by average Nigerians.

“I grew up and was going to school as a little boy, playing football bare footed. It was tough but I enjoyed what I was doing and I thank God.

“It was fun but it wasn’t the best place. We played football, went through some difficulties, to different places for football. Sometimes when you come back, you eat, sometimes you don’t.

“My journey has been difficult but I believe and I’m working hard. I was at Ojo when scouts came to see me and he told me his friend has an academy in Togo. I went there and I discovered there that it’s easier to travel from your country.

“I spent 8 months in Togo. The training was tough. Not a great condition, but it was ok. I promised not to go back the moment I got back home.

“I spent a lot on transportation to training, that my dad got tired and pissed. He told me to go get something doing.”

“My mum kept supporting me though. Along the line, I met one of my coaches in the past. His name is Coach Osahon. He asked me to go trial at Ebedei and that was how it all started in Nigeria.

“Ebedei changed it all for me. It was tough there, the training was difficult and I couldn’t meet up. We had a break and the owner asked us to go home but I stayed back and was training hard in the camp. I was running hard and I worked really hard.”

Speaking in how he almost gave up his dream out of financial exhaustion, he said; “I almost gave up football because nothing was coming home from me. I was about doing that when the opportunity came.

“Getting to Denmark was a dream come true. Some of my friends went to Ebedei for trials but they never told me. I went there, worked hard and found myself in Denmark and that was the turning point for me.”

On his spirituality, he said he’s not a very prayerful person but he does what he has to when he must do them.

“I’m a Christian but I really am not the fasting type. I’m not so consistent but I pray when I can.”

Onuachu joined Danish club, FC Midjtylland as a teenager, and was thrown straight into the competition. The club, known to have strong connections with Ebedei has seen the exits and arrivals of many Nigerians. Some of the Nigerians that have played for the team in the past include Rilwan Hassan, and most notably, Sylvester Igboun.

On the team, Onuachu said, “It is a great club. I was there when I was 18. They have a really good academy. I learnt everything there. It’s a tough club too, they are a good club and they handle players well.

When the opportunity to move to a better team in Europe came, Onuachu said it was too good to reject. “Every player’s dream is to play in Europe. I knew Genk could take me to the next level. Genk has had some talented players who now play in the biggest leagues in Europe. I take my moves one step at a time.”

“Everything here is nice. They are good people. It’s been a good atmosphere and Odey has been helpful.”

In his first game for the Super Eagles, the tall attacker made a scoring start to his Super Eagles career and said it was a pleasant moment.

While his form at home has depreciated ever since, he said it’s a matter of confidence and the level of expectations he’s playing with.

“Football, fans is what it is. We grow with the criticisms. It’s just a matter of time. I just need to be confident and I always wish those that are playing the best. It has not been easy but I know the chance will come.

“I’ve been progressing well. I still have a long way to go. We take it a step at a time.”

On his football role models, Onuachu was quick to pick two lanky attackers who are of the same mould as he is. He said;

“I like Kanu, Emmanuel Adebayor but I like so many players. But these two are my favourites.

His taste of music is local, he says, but he doesn’t have a specific name as favourite.

“I like Nigerian music, but I don’t have a favourite. I dance at times.”

On what drives him in and what keeps him ahead, Onuachu said he is a person with great “Focus, hard work, and persistency.”

Financial pressure from Nigerians is one area footballers have always had challenges overcoming. In his case, Onuachu said it’s normal and he is coping.

“I cope, try to help those I can and give my best. People will always talk, that’s life but I’m coping with the pressure, it’s normal.”