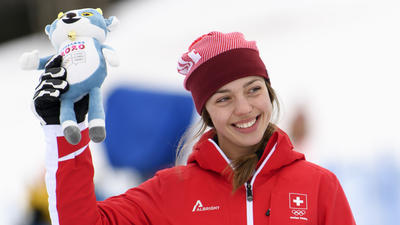 A week ago, Alpine skier Amelie Klopfenstein was not even part of the Swiss squad. But a late call-up gave the home crowd what they wanted on the opening morning of competition at Lausanne 2020, with the first gold of the Winter Youth Olympic Games going to the 17-year-old in the women’s Super Giant Slalom (Super-G).

Following a frustrating start to the season, Klopfenstein was devastated to narrowly miss out on selection for the Games but after her close friend Delphine Darbellay was forced to pull out with injury on 3 January, she took full advantage of her second chance.

An elated Klopfensein, who revealed that Darbellay had phoned her to wish her luck, said: “Just a few weeks ago I was a reserve and now; it’s incredible. I would not have believed it was possible.”

She finished in 56.27 seconds, 0.08 seconds ahead of France’s Caitlin McFarlane in silver, with Israeli Noa Szollos making her own piece of history by becoming the first Israeli athlete to win a medal at any winter Olympics. Szollos snatched bronze from Austrian Amanda Salzgeber.

The medal ceremony for the Men’s Super-G will take place on Saturday evening.