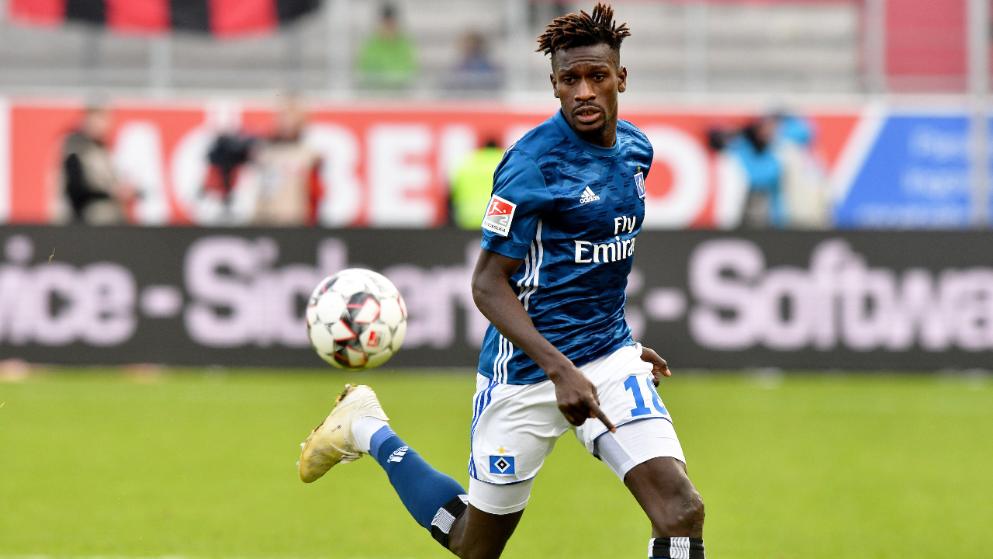 According to media reports in Germany, there are doubts over the identity of HSV Hamburg`s 21-year-old attacker from the Gambia.

German tabloid, Sport Bild, has revealed Jatta could have been known in the past as Bakary Daffeh and be two and a half years older than previously thought.

Jatta arrived in Germany in the summer of 2015 as a refugee, crossing through the Mediterranian sea in a life-threatening Journey to reach Europe. At the beginning of 2016, he attended trial as a 17-year-old at HSV Hamburg.

He signed a contract with Hamburg when he turned 18. But reports have emerged that the 21-year-old attacker may have been playing with a fake identity.

There are strong indications that Jatta, whose “from refugee to the Bundesliga ” story had made the headlines in Germany, had contrary to his statements, already played for several African clubs as well as the U20 national team of the Gambia. Two coaches Ibou Diarra and Mustapha Manneh, who once coached the Gambian player while still in the Gambia are said to have identified him, as Bakery Daffeh and not Jatta.

His former coaches also alleged that he played for several clubs, back home in the Gambia, including for the club Brikama United. Also, he was loaned to clubs in Nigeria and Senegal and was part of the U20 national team of the Gambia in 2004, using a different identity. (Bakery Daffeh).

The investigative Committee of the German Football Association (DFB) and the Hamburg district office have started investigations on the case.

A spokeswoman told the media The competent authority responsible for the papers of Jatta “will look into the case closely and follow up on the evidence. “The DFB has also gotten involved in the case “the investigative committee will examine the facts and shall make our findings known to the public,”said the committee chairman Anton Nachreiner.

The DFB also announced that FC Nurenberg, a second division outfit filed a timely appeal against the result of their match against HSV Hamburg which ended 4-0 in favour of Hamburg on Monday because Jattas eligibility under these circumstances was ineffective. The DFB sports court has already asked for an HSV statement and will decide “in due course” on the appeal.

Sports Bild is suggesting that Jatta may have registered for asylum with a reduced age for this reason:

Unaccompanied refugee minors in Germany have a greater chance of getting a right of residence than people who have reached the age of 18.

At the beginning of 2016, the result of a medical examination by Jatta had caused bewilderment. “It was discovered that his biological development is complete,” said the then sports director Peter Knäbel. Doubts about the indicated age had not come up.

HSV Hamburg has thrown their weight behind their player and believes there is no case against the Gambian. “We have Bakery Jatta”s valid passport including residence permit,” Hamburg”s CEO Bernd Hoffmann said. “Bakery has shown since his arrival, that he is an impeccable sportsman and a reliable teammate. He has quickly adapted well and has integrated into our club, we value him as a player and as a person. ”

The player himself has also denied the allegations.

Omasports reached out to his agent, Efe-Firat Aktas who said, “The people from Jatta`s country the Gambia are trying to cause problems for their countryman and they have been the ones spreading false information about him.”

Should the suspicion regarding Jatta be confirmed, the withdrawal of the residence permit, which was extended according to Abendblatt information recently for a further three years, and DFB.6:31 AMStart a new message