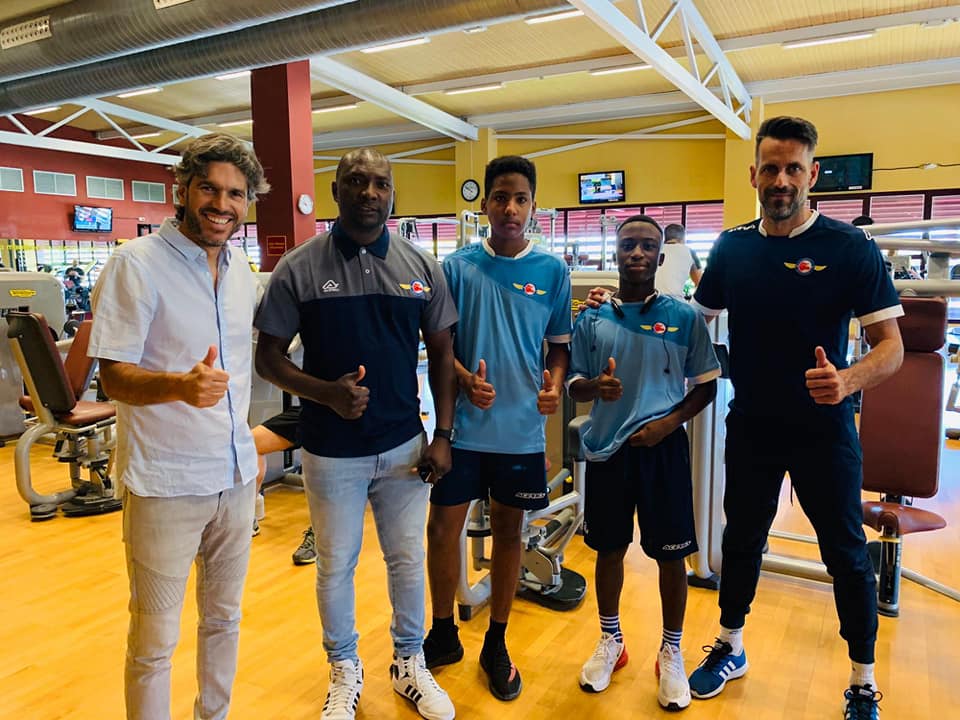 The dream of the average kid playing football on the dusty streets of Africa is to have the chance to train or play football in Europe. Reaching this level means el dorado for the ordinary kid but achieving it gets complicated by the day for reasons ranging from tough visa regimes, lack of proper academies, dodgy characters flaunting themselves as scouts and many more.
But for, Emmanuel Chidi Wemambu, 17 from Nigeria and Geovanni Peternel,16 from Ghana, The story is different.

The two players have been to Spain where they have undergone training at the Prestigious Sevilla Football Academy.

They were scouted during one of DROOM SOCCER-s open trials in Nigeria and Ghana.

They experienced a one-week training programme in Sevilla Spain where they joined other young stars from all over the world, training at the world-class facilities of Sevilla academy under the watchful eyes of the top coaches at the academy.

“I am very happy to have been selected by DROOM SOCCER to come to Spain for this lifetime opportunity. I have always watched the La Liga on TV and coming to train at a world-class academy in Spain is a dream come true for me” said Emmanuel Chidi Wemambu, one of the two players from Sevilla Spain.

Mr Emanuel Akporobaro, the project manager and lead scout at Droom soccer, who accompanied the young stars to Sevilla says:

“Our focus at Droom soccer is to provide the platform for young players across Africa to showcase their talents in such a way that they get discovered and taken to a level where they can reach their dreams of playing professional football.”

Other players, scouted by Droom Soccer who have also had the opportunity to train internationally are Oyadiran Tunnifemi and Ogunwande Moses who went on trials at MLS outfit LA Galaxy to mention but a few.

Droom Soccer is a football scouting network based in Lagos Nigeria with ist network spread across the continent of Africa as well as links with top academies across the globe.

Droom Soccer recently concluded a tour that saw the scouting team, led by Mr Akporobaro travel to Kenya, Ghana, Siera Leon, Ivory Coast and Liberia where it organized open trials and scouted a good number of young and talented footballers. A few of the players selected are already processing their visas to go on trials with a couple of Professional football clubs in the united state of America.

“We are happy that we at Droom Soccer can provide the platform for young and talented footballers in Africa, through our global network to develop their football skills thereby earning the chance to start their professional football careers. This is what we are here to do,” Said Emmanuel Akporobaro

“The amount of talents that abound on the continent of Africa is humungous and it gives me joy that at Droom Soccer, we can put action to words by combing the continent of Africa to unearth these budding talents. We are not stopping yet as we are still hoping to do South Africa and other African nations,” Emmanuel Akprobaro concluded.