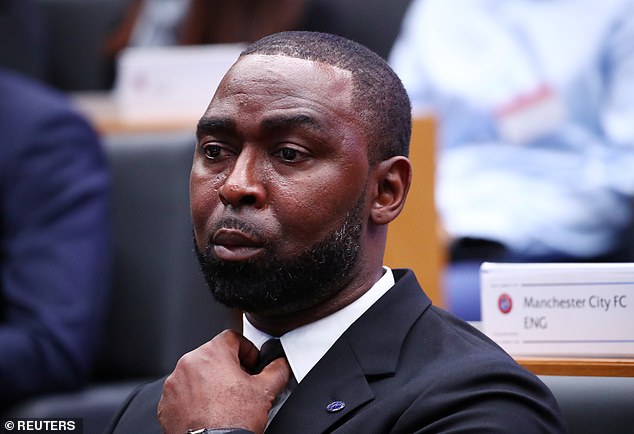 Share This in WhatsApp
By: Oma Akatugba, Nyon Switzerland
Former Manchester United and England striker, Andy Cole has described Manchester United’s Champions League Quarterfinals draw against Barcelona as a great one.
Cole, who formed a deadly strike partnership with Dwight Yorke, Teddy Sheringham and current United manager, Ole Gunnar Solksjaer en route to the Red Devils’ European victory in 1999, said it was a draw he’d expected.
In an interview with Omasports at Nyon, Switzerland, where the draws came up, Cole said;
”It’s a great draw for any team that plays against Barcelona especially with the history Manchester United has playing against Barcelona. There is the anniversary 20 years ago when Barcelona won the European Cup in Camp Nou. As I said before, it’s a draw I’d thought we’ll get. It happened today and everyone looks forward to it, no doubt.”
The former Manchester City attacker added that it doesn’t matter who is playing at home first because both teams will have the privilege of playing at home. He said;
”It doesn’t matter where the games are coming up because the truth is both teams will at home, irrespective of who comes first. I’m looking forward to the game because I believe it’s a game between two fantastic football clubs. The football will be very attractive and it will produce lots of goals,
He also commented on the importance of having a managerial change on Manchester United’s bench after Solksjaer’s wind of change blew across the Old Trafford dressing room. Cole expressed delight with the team’s brand of football and their level of performance.
”We can see the difference. We are getting the results and playing good football. I’m happy the players are expressing themselves and that’s what football is all about. You have to play with a high level of confidence.”
On the dangers posed by Barcelona talisman, Lionel Messi, Cole revealed he is a big fan of the Argentine and won’t be switching his admiration at any point.
”Everyone fears Messi. He is probably the best player that played the game. I’m a big fan of his and I won’t be standing to say I’m not because I watch every Saturday or Sunday when Barcelona plays. Those are the kind of things you have to deal with as a player(playing against Messi).”
He, however, said he won’t write United off because it’s a 50-50 contest.
”Of course, it’s 50-50. Otherwise, there’s no point turning up. You have to go in believing you can defeat Barcelona. My time in ’99, we played Inter Milan at this stage, then Juventus and I don’t think we were given much chance.
I hope Manchester United have a fit and good squad because they will all want to be involved in it.
Twenty (20) years ago, we represented Manchester United and the team has a special place in our hearts,” he concluded.
Post Views: 2,390
Share This in WhatsApp
Related TopicsAndy ColebarcelonaChampions LeagueManchester united