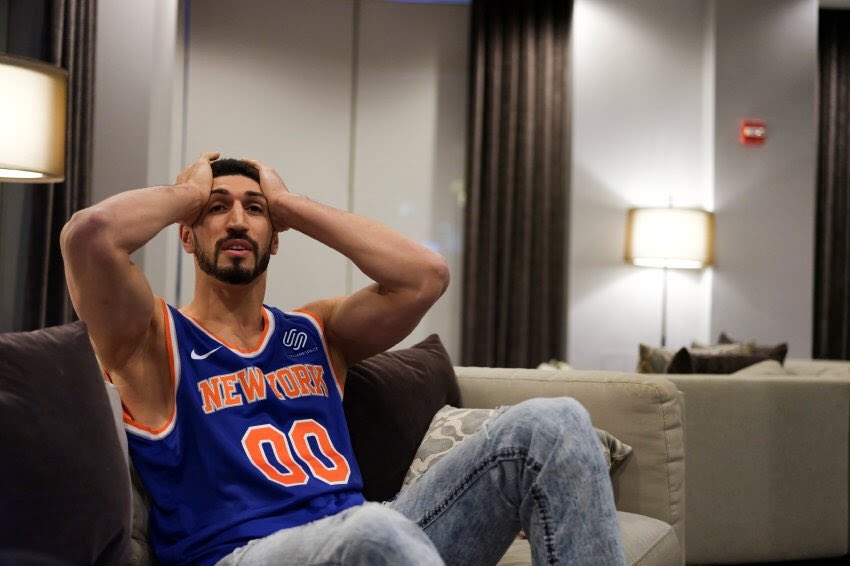 You may have wondered why the New York Knicks were without their Turkish player Enes Kanter in London as they faced the Washington Wizards. The reason, according to reports is that Turkish prosecutors have issued an arrest warrant for him, claiming that he belongs to an “armed terrorist group,” a network of Gülen supporters.

The warrant to arrest Kanter was issued after the NBA star criticised the Turkish supreme leader Recep Tayyip Erdogan for hunting down and capturing those who criticise him.

Kanter’s team, the New York Knicks played yesterday in London against the Washington Wizards, but Instead of playing in London, he remained in the United States for security reasons.

Kanter, a centre for the New York Knicks, did not play yesterday in London. Turkish prosecutors issued a warrant for his arrest as a member of an “armed terrorist group”. For Ankara, he belongs to a network of Gülen supporters. The player slams the Turkish president for hunting down and arresting those who criticise him.

Enes Kanter, a centre for the New York Knicks concerns are rooted in an extradition request filed by Turkish prosecutors, who want to try him over alleged links with Fethullah Gülen, an Islamic preacher accused of engineering the coup that happened in Turkey in July 2016.

Kanter was quoted as saying In a lengthy article, published in the Washington Post, “I received death threats for my criticism of Turkish President Recep Tayyip Erdogan.”

“I receive many death threats,” he writes. “I used to love walking around New York City alone, but I can’t do that anymore. My friends and family in Turkey could be arrested just for talking to me”.

“Anyone who speaks out against him [Erdogan] is a target. I am definitely a target. And Erdogan wants me back in Turkey where he can silence me,” the Turkish standout explained.

Kanter also maintains he has been frequently warned not to speak out and stop criticising Turkish leaders; however, he found inspiration in former National Football League (NFL) star Colin Kaepernick who began kneeling during the pre-game US anthem to protest racial inequality and social injustice.

The Knicks player believes, President Erdogan uses global law-enforcement group Interpol “as a tool for having his critics arrested in other countries”.

It would be recalled that many Journalists were prosecuted and kept in jail in Turkey after the July 2016 coup. A Turkish -German Journalist Deniz Yücel, a correspondent for the German newspaper, Die Welt was also on February 14, 2017, arrested by Turkish police on charges of propaganda in support of a terrorist group and inciting the public to violence.

Kanter can live and work in the US on permanent bases as a US green card holder, but he is worried because he lacks US citizenship. This means he could be sent back to Turkey.

“I can’t risk travelling overseas. Even if I did, I wouldn’t travel this week to Britain, where I easily could be kidnapped or killed by Turkish agents,” he said.

Kanter was indicted by a Turkish court last year over alleged membership in an “armed terrorist group” after being contacted repeatedly by people close to Islamic preacher.

Turkish prosecutors circulated a “red notice” for Kanter, an Interpol request to find and provisionally arrest an individual pending extradition, for using social media to show support for Gülen.

The basketball star declines the allegations against him. Noting Turkey’s current “tough situation” and the ongoing purges, he states that, “Erdogan thinks free speech is dangerous, and he accuses critics of being terrorists.”

The Turkish government has pursued a witch hunt against hundreds of thousands of people after the failed coup in mid-July 2016, that threatened President Recep Tayyip Erdogan’s power,– soldiers, judges, teachers, intellectuals, ordinary people – accused of association with Fethullah Gülen.

Sarri comes hard on his players after Arsenal defeat.
Give me so much money like Pep and Klopp whenever I need new players- Mourinho tells prospective employers.
Change Language »