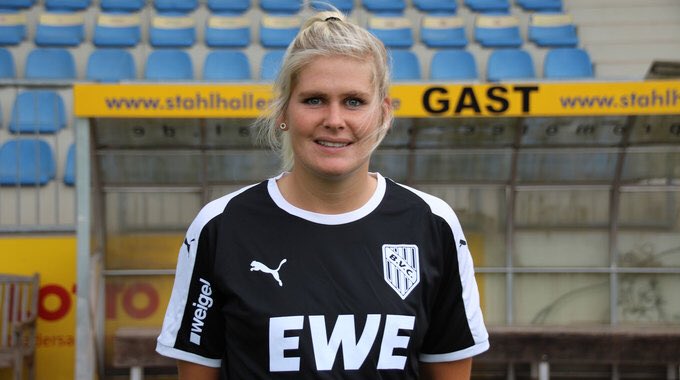 Imke Wubbenhorst, Germany’s first female coach to lead a male football team in a top division has set out the tone for journalists.

In an apparent attempt by a journalist to carpet her dominance and control of the dressing room, the former German international was asked if the beagle sounds before she enters the dressing room because of her players.
If her response weren’t a resounding statement of her strength of character, it would best be laying down the marker for other journalists who may be yearning to ask the same undermining question.

Wubbenhorst, 30 sarcastically replied the journalist that her players are picked based on the size of their penis. “Of course not. I am a pro. I pick (my team) on penis size”.

She further revealed her authoritarian stance by reminding who cared to listen that she’s in charge and as a teacher, she has to show that.

“The topic bounces off me. I want me to be judged on the athletic performance, not on whether I’m a woman or a man,” Wubbenhorst reiterated.

“I will not have any problems with (asserting) authority. I’m a teacher.”

Her team, Cloppenberg are swimming in relegation waters with 12 games to go, but she’s not batting an eyelid, yet knows the enormity of the task ahead.

“We only have 12 games left to stay in the division. It’s going to be a tough job.”