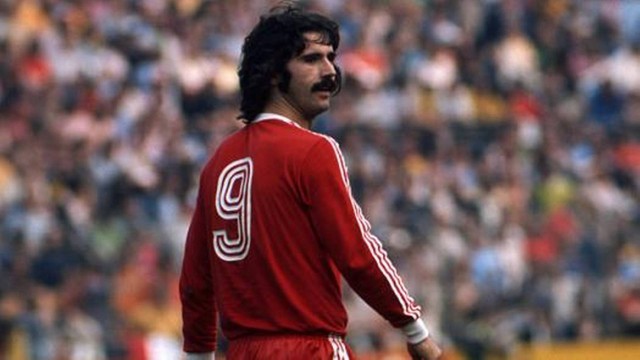 Germany has a good number of prolific goal scorers, but non can be compared to the legendary Gerd Müller. The 73-year-old former Bayern Striker is Germany’s all-time best goalscorer.

In the seventies, the famous “gaol banger” scored a lot of goals to help Germany and his club FC Bayern win several titles. At international level with West Germany, he scored 68 goals in 62 appearances, and at club level, after 15 years with Bayern Munich, he scored a record 365 goals in 427 Bundesliga games and an international record 66 goals in 74 European club games. He was averaging more than a goal a game with West Germany. He won the 1974 FIFA world cup and the 1972 European cup with West Germany. He won the Ballon d’Or in 1970. At club level, Gerd Müller won four Bundesliga titles with Bayern amongst other titles.

But Gerd, nicknamed “Bomber der Nation” (“the nation’s Bomber”) or simply “Der Bomber”, now 17th on the list of all-time international goalscorers, despite playing fewer matches than every other player in the top 25, has been suffering from dementia for nine years. Three years ago, Gerd was moved into a nursing home near Munich. A nursing home is a retirement home – sometimes called an old people’s home. It is usually a multi-residence housing facility intended for the elderly. Typically, each person or couple in the house has an apartment-style room or suite of rooms.

Gerd’s wife Uschi Müller, with whom he has been married for 50 years, spoke with popular German Tabloid BILD and she said, “He is doing well in the at the moment. In the home, he has optimal care and attention. He feels good and at home.

Müller has been made to undergo “Bobath therapy” in the last eight months. It is a special physio treatment in which the whole body is stretched out, and it stimulates the nervous system.

Uschi Müller says, “I have the impression that it is very, very good for him.”

 Uschi visits her husband daily in the nursing home and she he is always delighted whenever she is with him.

“Even though he is limited in his possibilities, I still reach him. He is happy whenever I come around. Spending time with him is fun. But he is not sad when I go again. ”

Ushi is not the only family member who visits Müller regularly, his daughter Nicole and her husband as well as his grandson Mick (15), who lives a few hundred kilometres away from Munich, also travels all the way to spend time by his side.

Bild also reported that Müller was recently visited by the likes of former Bayern coach Jupp Heynckes (72) and assistant coach Hermann Gerland (63), with whom Gerd discovered and promoted talents for many years.

“One can notice that the two are familiar with him. He really laughed.” Uschi said regards the visit of Heynckes and Gerland

These are Words that will undoubtedly serve as a soothing relief to the fans of Germany’s highest ever scorer.

Akpoguma- “I do not need a 1000 euros Steak.”
Report: Ronaldo ordered To Submit DNA Sample Amid Rape Investigation
Change Language »