EXCLUSIVE: From the sandy pitches of Nigeria to the green grasses of Europe- The inspiring story of Jamilu Collins. 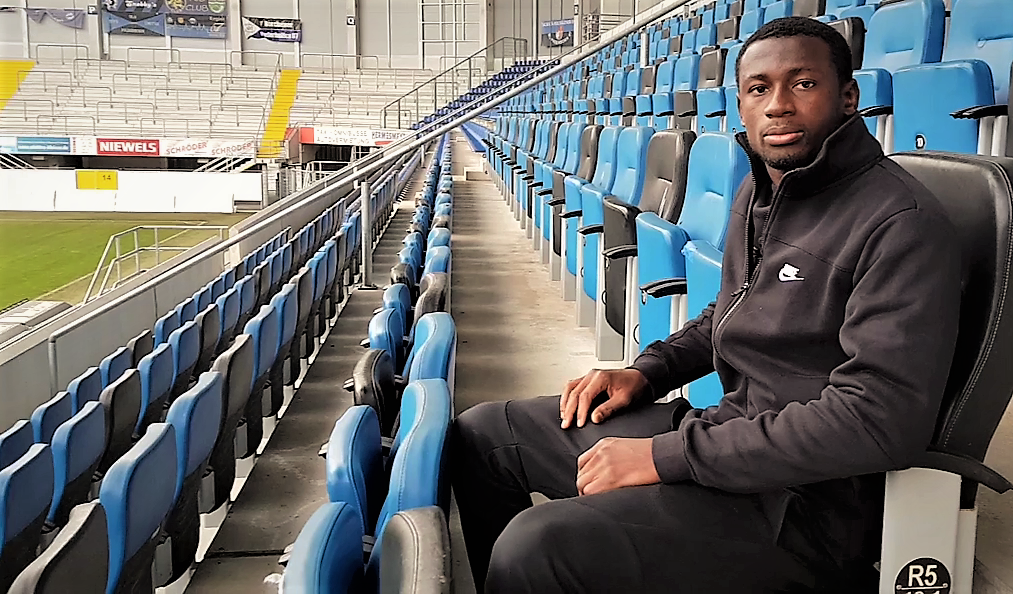 The name Jamilu Collins does not ring a bell amongst football fans in Nigeria, at least for now, but his story and entry into the Nigerian senior national team rings very loud.

Having broken into the Nigerian national team like a thief in the night, SC Paderborn’s Jamilu Collins got so many football fans and journalist both in Nigeria and Germany where he plays talking. The question you would want to ask is why Jamilu’s story is so compelling?

As of 2017, Jamilu was still playing in the third tier of German football, after crossing over from the east of Europe where he spent five challenging years. Born in Kaduna, one city in Nigeria that has produced a large number of talented footballers who have gone on to play professional football in Europe as well as playing for the Nigerian national team. Jamilu started on the streets, just like the average Nigerian footballer. He was scouted by the Abuja football academy and was lucky enough to be one of the few selected to travel to Croatia, where he joined Rijeka in 2014.

Leaving the sandy pitches of Nigeria to the green grasses of Europe is the dream of every young Nigerian footballer and “it was a phenomenal moment” Jamilu says.

“Because for me everything changed. The environment, the weather, I mean everything. Leaving the red sands at home and coming to Europe, where the grass is green was great.

“It offered me the chance to develop technically and otherwise. its one of the best things to happen to me.

Jamilu’s dream of reaching Europe to seek greener pastures had come true. However, there were still some bumpy moments ahead for the then 18-year-old defender.

“In the beginning, life was quite difficult for me because I missed home and my family. But the longer I stayed, the more mature I became in the head, and as a footballer, this is part of it.

“It was quite tricky adapting to the system in Croatia, but once I met my wife, everything became more comfortable. She helped me feel at home, and as I began to speak with and visit my family in Nigeria regularly, everything became better.

Nonetheless, the story on the pitch wasn’t quite suitable for Jamilu as he found minutes hard to come by at Rijeka. Consequently, he was shipped on loan, albeit on his request to get playing time. The left-back went on loan in each of the four seasons he spent at the Croatian outfit.

“Most of the times I went on loan was because I chose to, so I could get playing time because my coach as at that time preferred maturer players and I was 18 years old then. Hence my decision to go on loan, which was a good one as I racked up enough playing time while away on loan. ” Jamilu’s time on loan was also significantly affected by injuries. First was in Slovenia where he was on the sideline for a large part of the season. It was undoubtedly trying times for the Left footer, but ” I never doubted myself” he says.

“Everything was going well in Slovenia before I got injured, but because I believed in my qualities and liked to work hard. I always knew something good would come for me, but I didn’t know when.”

On his return to Rijeka, the defender got injured again and was consequently released by the Croatian outfit to go on a free. Enters Paderborn, a team as of the time he joined them, were playing the third division of German football. After trials at the club, free agent Jamilu signed a two-year contract on 6 September 2017.

“After spending five years in Croatia, it was time for me to move on to new challenges. So I spoke with my agent and Paderborn came up. My Paderborn story is a miraculous one.

“I love it here already. The city is quite lovely. Small but filled with friendly people. People who make the city great. They are kind and courteous, and the people here see you every day, and that is important.

The warm welcome and love showed by the fans and people of Paderborn to Jamilu were quickly repaid on the pitch as the defender helped the team gain promotion into the second division of German football, accumulating 19 league appearances.

While Jamilu was helping Paderborn climb up the ranks in Germany, the Nigerian national team coach Gernot Rohr was watching closely. He would be called up by the German manager, later on, to feature in the AFCON 2019 qualifiers against Seychelles. He did not get any minutes in the game against Seychelles. Nonetheless, the coach had him in his plans. Jamilu made his debut against Liberia in a match that featured the president of the country, former world footballer of the year George Weah. Gernot Rohr was impressed by the 24 -year old’s performance and handed him his competitive debut against Libya in Uyo. Jamilu impressed the manager as Nigeria won by 4-0. He featured in the return leg in Sfax, and Nigeria won 3-2.

“I did not know how the coach got to know about me. I was busy here in Paderborn working and then I got an invitation from the Nigerian football federation.

“It was a huge honour for me. I was happy to receive the invitation. It is indescribable. It is a joy for every Nigerian player to get invited to play for the Nigerian national team. Once again, I cannot describe how I felt at that time. My heart It was filled with joy.

Moments after the coach of the Nigerian national team Gernot Rohr released his squad list for the Seychelles game, Nigerians, especially on social media, complained about the inclusion of Jamilu, because he plays for a lower division club. It is a norm in Nigeria for Nigerian football fans to sink their teeth on the matter of squad list, released by national team coaches. Jamilu was one of the names constant on the lips of those disturbed to see the name of a player playing in the second division on the list. However, after three games for the national team, Jamilu believes he has responded to his critics by his performances on the pitch, affirming his recognition of the fact that Nigerian football fans are passionate about their national team.

“I read messages of people criticising my inclusion before I arrived Nigeria but I was calm as I wanted to show on the pitch my level as well as the level of the second division in Germany and I am happy all have all seen that the second division of Germany is good.

“We all know that the “Bundesliga 2” is one of the best, if not the best second division in the world. There is no doubt about that. You can compare it to some of the first divisions in Europe. The level here is high.

“I want to stay focused and keep my mind off what people are saying. Football fans are passionate, and Nigeria has so many fans who like to speak about the national team, and this is normal. I aim to do well on the pitch.

Jamilu did not fail to express his appreciation to his new national team colleagues for the cordial welcome he received as a newcomer to the national team.

“I was well received by the team as most of the boys warmed up to me especially Ahmed Musa.

The national team call-up for the Kaduna born player has not just been a significant honour but has also offered him the chance to reunite with his former teammates at youth level.

” I played the Toulon invitational tournament in France together with Wilfred Ndidi, Moses Simon and Shehu Abdullahi. We met again and rekindled our friendship in the super eagles camp and it camaraderie was excellent, but I had a good time with the whole team. The team spirit is lovely.

Jamilu seems to have drawn inspiration from reuniting with his old friends as well as meeting other big stars of the Nigerian national team, but he says he derives most of his inspiration from his Croatian wife and one year- old son Santiago. They met while he was still in Croatia and as they say, and the rest is history. They both currently live together in Paderborn.

“I met my wife in Croatia. I went shopping, and I met her working there. We have been together for five years now. She has been there for me both in good and bad times, and as I said before, she helped me adapt faster to the system in Croatia when I newly arrived in the country.

“My Dad earlier had doubts over my decision to marry a Croatian, but after getting to meet and know her, he welcomed her into our family with both arms.

Just as his parents in Nigeria welcomed his Croatian wife warmly, so he was received by the fans at SC Paderborn, a gesture that means so much to the player and one he is not taking for granted.

“I am satisfied in Paderborn because I was well received. Paderborn means so much to my family and me as well. I am happy to be here”.

EXCLUSIVE: Andre Onana- I am happy at Ajax and that is the best for me at the moment.
Jose Mourinho releases official statement 24 hours after he was sacked by Manchester United.
Change Language »