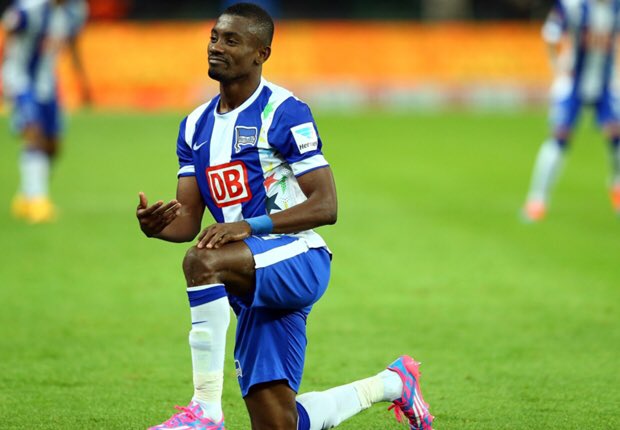 Hertha Berlin striker, Salomon Kalou believes it will do the Super Eagles of Nigeria a lot of good if the Nigerian football federation can convince his teammate. Jordan Torunarigha to represent Nigeria at international level.

The 21-year-old Hertha Berlin centre-back has played for the German under 21 national team, but he is still eligible to play for the Super Eagles of Nigeria being that his parents are Nigerians. However, the youngster has already made it clear he wants to represent Germany rather than Nigeria after turning down an invitation from the Nigerian national team coach Gernot Rohr in may 2018.

Speaking after Hertha Berlin defeated Hannover 96 2-0 in a Bundesliga fixture, a game where Jordan scored and created an assist. The 33 years old former Ivory Coast international said he does not know what the situation between Jordan and Nigeria is and would not want to comment on it. “Jordan is a fantastic player, a good boy. I hope Nigeria can convince him but right now he is playing well for Hertha and that is the most important for me“, Kalou told omasport

Kalou could have represented the Netherlands but could not due to a botched naturalisation application and ended up playing for the ivory coast national team after having rejected all invitations by Ivory Coast before his failed application for a Dutch passport.

But for Jordan, the story is different as he is a German citizen even though his both parents are Nigerians. His father is Ojokolo Torunarigha. He is an ex-professional footballer and currently works with Hertha Berlin as the trainer of the under 16s. omasports asked Jordan after he scored his first Bundesliga goal for Hertha why he turned down Nigeria, the player responded by merely saying “I do not want to answer that question.”