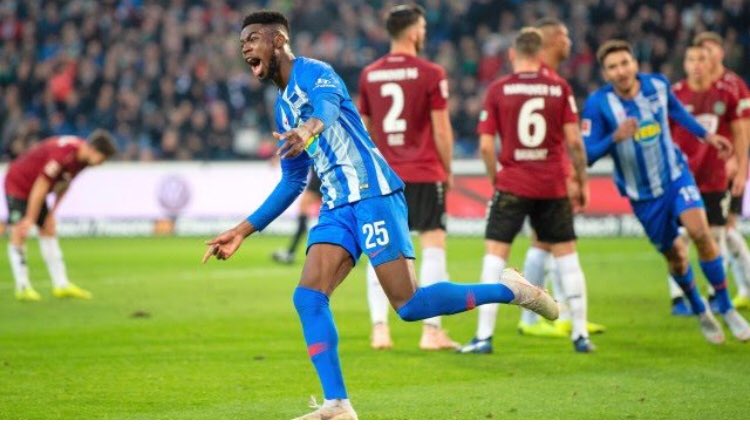 German – Nigerian centre-back Jordan Torunarigha recorded his best performance of the Bundesliga season so far in Hertha Berlin’s 2-0 victory away to Hannover 96. Hertha started the game like a house on fire with Australian winger Leckie Mathew almost sending a dangerous pass into the opponent’s box within 30 seconds. The host responded with two decent attempts through Niclas Füllkrug on 16th minutes and midway through the half, but the Hertha Berlin goalkeeper was very much around to thwart every attempt by Hannover 96 to score a goal.

Ivory Coasts Salomon Kalou had his attempt blocked by the Hannover Goalkeeper Esser Micheal on 24th minute before striker, Ibizebic headed a cross by Davie Selcke just a little over the bar on 40 minutes.

Jordan Torunarigha gave Hertha Berlin the lead just before the half-time whistle was blown as he headed home from a corner kick as the Capital team capped their domineering first-half performance with a goal.

🗣️ Hannover coach André #Breitenreiter: I think that was nearly the worst first-half we have played since I have been here. We wanted to play with more courage in the second half and we got better. We had chances to score but they deserved the win in the end."#hahohe #H96BSC pic.twitter.com/oDP9xZdu48

The second half started with Hannover playing better but found it difficult to create anything tangible. Hertha looked more likely to score as the second half wore on and on 59 minutes, Ibizevic scored, but the goal was ruled out for offside in the build-up. But Jordan Torunarigha dashed forward on a solo run after a set piece before sending a beautiful no-look cross from the byline to Ibizevic who headed the ball in to give Hertha a 2-0 lead and seal a very vital away win for the visitors and marking his 120th Bundesliga goals.

“This is not a normal thing for me because in the game against Fortuna Dusseldorf I did not play too well and I assured the coach that I could do better and this performance is good for me.” An excited Torunarigha, told omasports after the game.

“It was a good game, and we needed three points. I think we allowed them to dominate on purpose. We allowed them to play the ball and tried to counter them. After that, we scored the goal we needed and controlled the game” Hertha Berlin’s Salomon Kalou told omasports

Hannover 96, who are second from bottom on the league table mounted more pressure in an attempt to find a goal as the game approached the final stages but could not break the Hertha backline.