Video Exclusive: Thomas Partey- I get my inspiration from eating “KOKONTE” 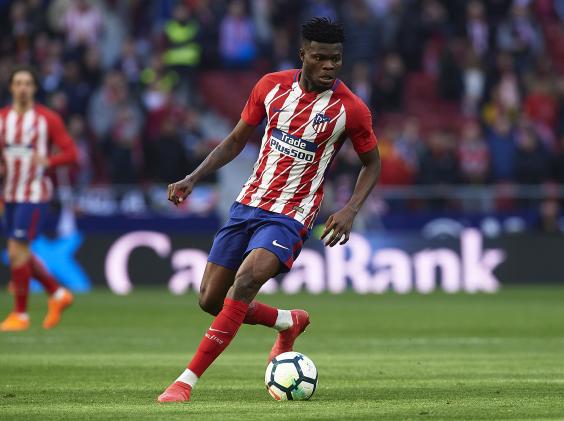 The dream of every young footballer from West Africa is to play in some of the most beautiful stadiums in Europe, as well as to earn good money in other to be able to help their families in Africa escape poverty. But for Ghana and Atletico Madrid’s Thomas Partey, he is already living that dream, Albeit it did not come so easy.

Partey was spotted playing football by an agent who believed he could take him to Spain and earn him a professional contract. His family did not have the money required, but his father sold off some property to fund the move, and Partey didn’t know this.

Partey got a contract with Atletico Madrid’s reserves which later ended up into loan moves at Mallorca and Almeria. He returned to Atletico in 2015 and made his debut in a 1-0 home win against Espanyol in November of that same year. And like they always say, the rest is history.

Haven returned to Atletico after two loan spells to Mallorca and Almeria respectively. The midfielder is beginning to enjoy his time at the Madrid outfit.

“Last season I played 24 matches from the bench and this season I have started more than 30 matches. I think everyone has seen what I have done.”

Partey, who is regarded by Diego Simeone as the “Unsung Hero” regularly keeps in touch with his loved ones back home in Ghana through the various social media platforms.

“I always connect with my people back home in Ghana, via social media, WhatsApp, Facebook. I always see my people, and I see them happy, that motivates me and gives me the energy to be able to work harder”.

Just like the current IBF WBO boxing heavyweight champion, Anthony Joshua who has his roots in Nigeria is inspired by eating Nigerian meals such as Pounded Yam and Egusi Soup, Partey gets his inspiration from a Ghanian delicacy known as “Kokonte and Groundnut Soup.

“I get more inspired by eating Kokonte and Groundnut Soup.”

The 24-year-old got his first call-up to the Black Stars of Ghana on 5 June 2016. He scored his first international hattrick in a 5-1 win against Congo in a 2018 World Cup Qualification match.

Partey believes he alone does not represent the future of football in the West African nation, but there are also many other talented players who represent a bright future for football in Ghana.

“I believe there are a lot of players who represent the future of Ghana. We have to keep working because nothing is impossible.”

Music in Ghana is vast. And Ghanaians love their local music stars, one of such stars is Dancehall music maker, Shata wale, who Ghanaians like to compare with some Nigerian Artistes, (just like the case of the Nigerian Jollof VS The Ghanaian Jollof) One of them is Davido, who prides himself as Africa’s most significant act. The versatile player also had something to say on that

“I am a Ghanian; I enjoy music, I love them both. They are all good”.