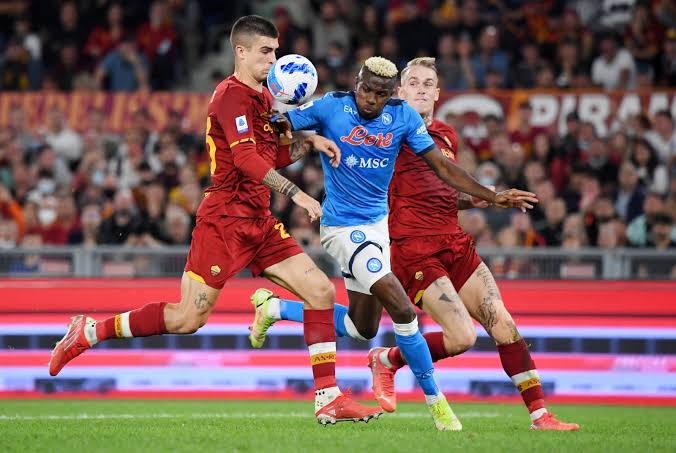 AS Roma manager Jose Mourinho says Napoli tried to play their game directly through star forward Victor Osimhen at first, and then added that it is “far from easy” to control the young Nigerian.

Both teams played out a goalless draw at the Stadio Olimpico on Sunday. Napoli failed to score for the first time in the league this season, as they dropped their first points.

“The game had a lot of transitions in it – they tried to play really directly through Osimhen and then bring others into play around him,” Mourinho told the club’s official portal.

“When we dropped a bit deeper then Insigne started to play in central areas, and that was when it became important for [Jordan] Veretout and Bryan Cristante to close that space down.

“[On Sunday] I liked the organisation, and the way we controlled – in a certain sense because controlling him is far from easy – Osimhen’s attempts to get into space. I liked both performances, for different reasons. There’s clearly something there to work on and learn from.

“It was a tough game, they had their chances and so did we. And perhaps it was a unique game too: both coaches sent off.”

Both managers – Luciano Spalletti and Jose Mourinho – were sent off in the first half for argument. Mourinho received a second yellow, while Spalletti was shown a straight red.

Napoli are still top of the Serie A table – but now equal on points with AC Milan (25), while Roma are fourth on 16 points.