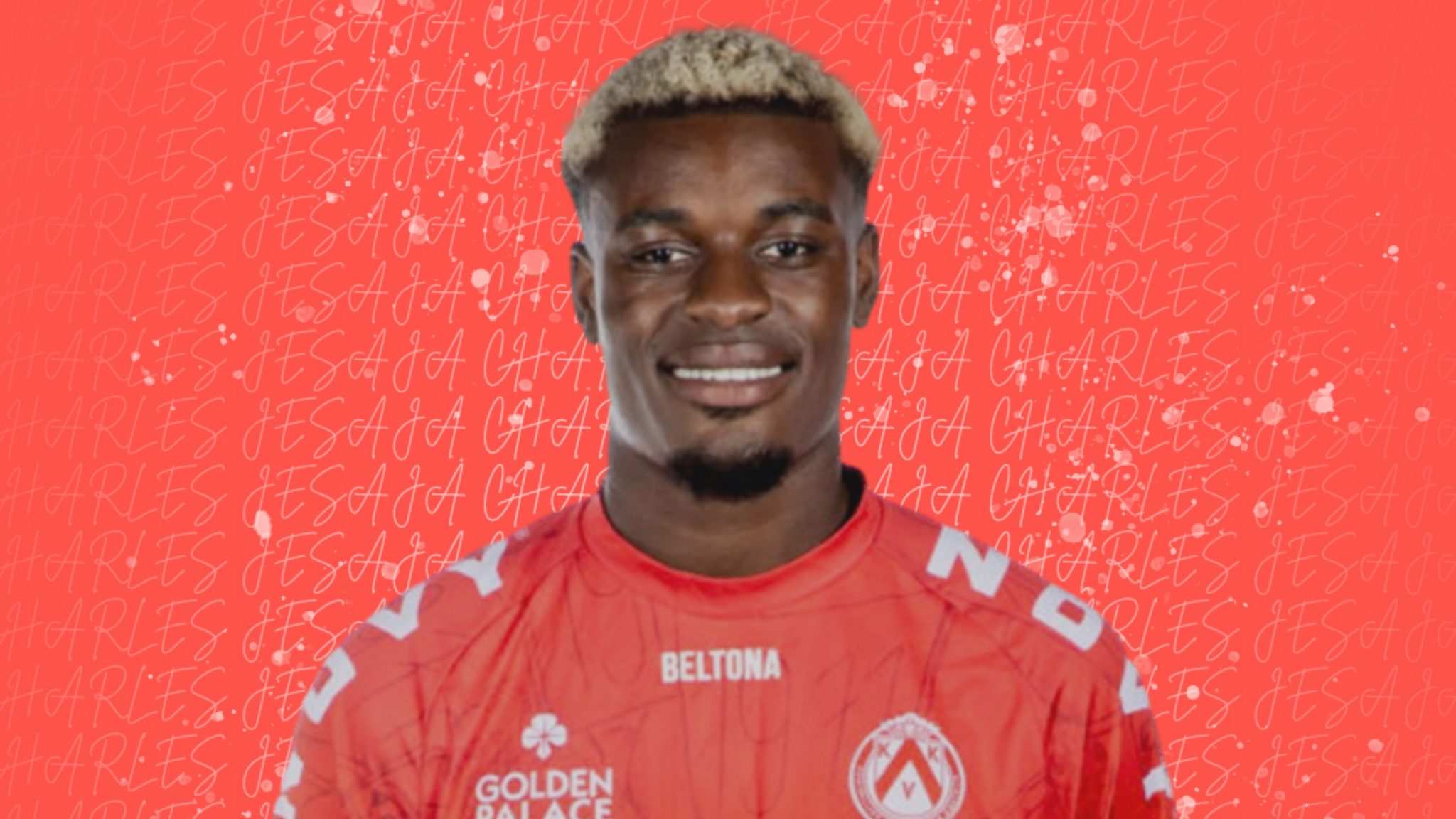 Many footballers start their careers on the street. Open to very few opportunities, they learn the intricacies of a game which has passion as its first currency. In Africa, some call an opportunity grace, others call it luck, to some it’s strategy. In some cases, it’s the sheer sound of one’s last name. Some names open doors, especially when they are spiced with skill and talent. For CJ, the son of CK, it’s a bit of all. Chance, hard work, opportunity, grace and luck. He’s living his name.

Chance Jesaja Hermann, 21, is the son of former Black Stars coach, CK Akonnor, but that’s not all about him. He’s a young, growing talented footballer. One who learnt the trade of the game when his most little ideas hardly saw professional football as an opportunity to live in the reality of his dreamland.

He is growing in popularity in his homeland, Ghana but many are still confused as to why he doesn’t carry his father’s name. There are complications to the story and he’s always known himself to be Hermann, he said. There’s a lot to a name, but there’s more to familial connections more than a name. He may not be carrying his father’s name, but he’s just as close as a son can be to his father.

“I grew up with my mother, so we were living in a small apartment. We didn’t have much. But it was good to live as a little child. I had fun in my childhood, my mother raised me up so I was happy in my life when I was a little child.

“Back then, I used to play a lot of football. I started early and my mother was always there with me. So I had a good childhood.”

CJ played football in parks in Germany and from that moment on, the dream got clearer. He wanted to play the game and it wasn’t a surprise to his father’s closest allies. They saw the ability in him, and if refined, he could go places. The motive was simple. Get him to good academies and see him blossom in the coming years. It was the right move and his father’s agent when he played was instrumental to his progress.

“Honestly, it was my father’s old agent who brought me there (to Wolfsburg). So I knew that my father was playing there and I knew they wanted me. So I took my chance and went there. From 2015 to 2021. I joined Wolfsburg at the age of 14.”

For three years, CJ Hermann was on the radar of some of Europe’s most illustrious clubs. In 2021, he settled for where his development would be faster and where he could play as many number of games as he desired. Belgian club Kortrijk have had Ghanaians in the past, including Bernard Kumordzi and Asiedu Attobrah. It was home to the youngster and he was in good company. When he signed for the Belgians, he had Eric Ocansey as one of his teammates and was joined a few months after he signed by former Werder Bremen player, Jonah Osabutey.

Highly-rated in Europe, and loved in his native, Germany and Ghana, Hermann said the love he’s shown in the West African country gives him a filling sense of pride. Despite not being in Ghana for more than a decade, he knows the country, its people and its culture.

“I grew up with Twi. My mother taught me how to speak Twi. I can’t speak it well. When I speak people understand me, but not the African way. But I can speak Twi. It’s good.”

One of the easiest connections of Africans to the motherland is food and arts. Everyone loves Africa’s arts but Africans have a lot of special affection to the food they eat. Probably the biggest banter in the history of foods, Nigerian and Ghanaian Jollof rice is a regular point of argument between citizens of both countries. Hermann loves a slight banter too as he is a big fan of the Ghanaian Jollof.

The 2022 African Cup of Nations in Cameroon may come too early for Hermann but he hopes to someday represent the Black Stars when he’s called upon. Trained in Germany for the better part of his career, and represented Germany from U15 to U19, the next step may be in Ghana’s senior national side if he gets a chance .

“I can name a lot of Ghanaian footballers. I follow them. The Ayew brothers. Sulley Muntari. I watched them all in the World Cup in 2006. Asamoah Gyan. Michael Essien. Because of Essien, most Ghanaians want to play for Chelsea. They’re like legends. Yes and my dad of course. Abedi Pele, Tony Yeboah.

“And now in my generation, there are also lot of Ghanaian players who’ll like to play for Ghana also like Richmond Tachi, who plays for Dortmund second team. John Yeboah playing for Willem II in Holland.”

There’s nothing as respectable as playing for one’s fatherland. It comes with a lot of good emotions and pride, and currently, like CJ Hermann, many Ghanaians want to be a part of the rejuvenation of the Black Stars. They’d like to someday don the white jersey of Ghana and play before large crowds in Accra and Kumasi. They’re big dreams.

“Most of my guys would like to play for Ghana. We’ve had that conversation before and most of them say Ghana. I think when the chance comes for them also, they’ll play for Ghana.”

Hermann is not alone on the German train in his family. Two of his brothers play in Germany and will someday be faced with the choice of where to represent. It’s a decision that will come with time, and the coming years may leave the brothers with making important decisions. Hermann doesn’t know what his brothers’ desires would be but he knows it’s a question of seasons.

“I have two brothers. One plays in Dortmund, one plays for Hannover 96.

“I think the future will tell (where they’ll represent). I don’t know what they want to do, but I think the smallest one of us will play for Ghana. Right now, the one who’s playing in Dortmund, not long time ago, in his debut for the U15 national team, he played for Germany. I’m proud of them. They’re doing their stuff. I’m helping them where I can help them

Born and raised in Germany, Hermann had to move to Belgium to get more minutes under his belt. He said that came with a lot of adjustments, to style and systems, but he’s getting used to its demands. “I had to get used to this style of playing in Belgium. It was a little bit difficult in the beginning. But now I’m getting used to it. I’m getting more stronger. I can feel it in the training sessions. I am getting fitter and fitter. So I’m waiting on my chance to play and to score.

“I’m a centre forward. I’m a striker but I like to play football. I’m a real 9 but most of the time, I like to play and use my speed and run into the deep-empty spaces, open spaces. I look up to Lukaku. For the goal thing I look to Lukaku. But for playing style and fun, I look to Thierry Henry.

“I want to achieve many many great things to be honest. I know the way won’t be easy to get to where I want to get. But right now I’m focused on getting playing time so I can start to score. So I hope the following year I can go to the world cup.

“It’s in my mind right now. I want to start playing and scoring goals so I can feel better on the pitch, feel confident. So when the call up comes, I hope I can help my fatherland.”

“I like to listen to Ofori Aponsa. He’s an old school musician. But right now, Migos is my guy. In Africa, Omah Lay and many Nigerian artists doing good music right now, like WizKid, Burna Boy. Of course Sarkodie the legend.

“American music, my favourite artist is Drake and Pop Smoke – because you can feel the energy in his music but he sadly passed away.”

The chance he waits for will be determined by how well he performs in his Belgian club, but he is up to the task and believes he has what it takes. Ghanaian national selectors have a choice to make and he has his chance to take, when he’s called upon.