I Want To Play For Nigeria – Hamburg’s Jonas David 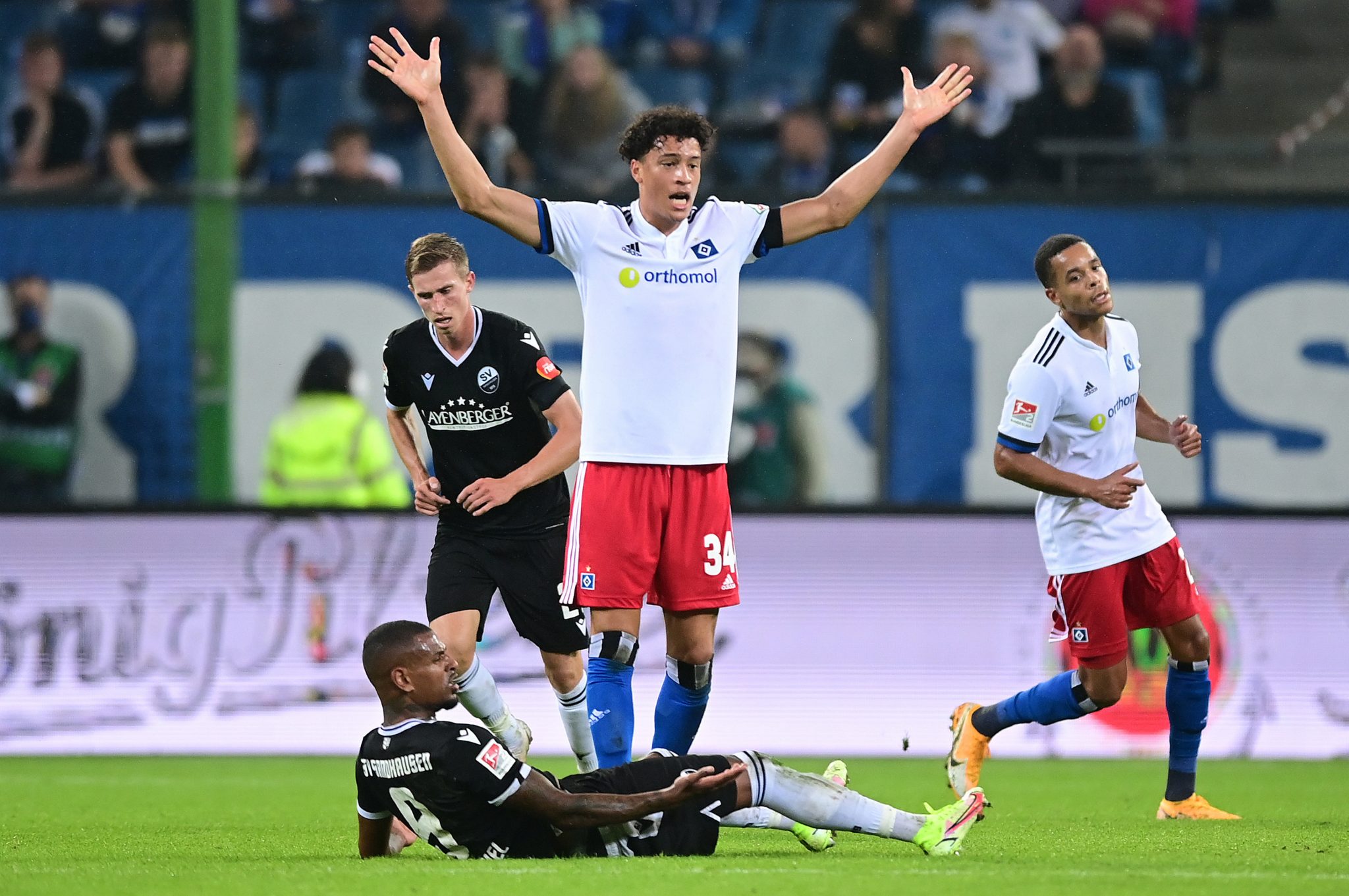 Hamburg defender, Jonas David has revealed his desire to represent the Super Eagles of Nigeria at the national level.

David, in an interview with Omasports, said he has always kept close tabs with the Nigerian national team and the country as a whole. He said representing the Super Eagles will be a dream come true and will be an honour to his father, who is Nigerian.

Born in Hamburg, Northern Germany twenty-one years ago, Jonas Benjamin Chimezie David played in the city before being snapped up by the current Bundesliga 2 side.

Hamburg SV is one of Germany’s biggest clubs, in history and reputation, and also has one of the country’s biggest stadiums. This stadium has been home to David, who has played in every game this season after returning from a loan move last season. The 6’3” defender has represented the German national team at U-19 and U-20 levels and is one of the better-rated young defenders in the country.

David, like many other youngsters of Nigerian descent in Europe, said he will like to represent the Nigerian national team in the coming years, as he’s inspired by the many stories he has heard, and seen. “Of course, It is my goal (to play for the Super Eagles), it’s like a dream coming true. I mean, it’s the country of my father. I want to make him proud. I want to make my family over there proud. I mean to give something back. Of course, there are other ways but I think it’s also a good way to give them something back. I mean it’s, it’s a part of the family of my history, and it would be an honor to play for the Super Eagles with them. They have great players. I mean like in the Premier League and stuff they’re crazy players. It would be crazy to play next to them. Players like Iwobi, Iheanacho, Ndidi. Top players, you can learn so much from them. It would be a dream for me,”

He said his father had a discussion with him on representing the country and he was categorical about his desire to represent the Super Eagles. “We had discussed the topic, like some years ago, and I already told him like I want to go and play for Nigeria and he loved the idea. But somehow it didn’t work out but now, we will get a new chance maybe in the future. So, of course, he’s excited too and he will be good and in support, I think. Of course, he’s from Nigeria. He was born and raised in Nigeria, he loves football like, I think in Nigeria, they are crazy. “They love football like crazy, so he would love it too. I mean it would be fantastic for him to see his son playing for the national team. He will be so proud. “I mean, my dad’s from Nigeria and my mum is from Germany. We were raised in both cultures. Like the German culture and the Nigerian culture. We eat Nigerian food. We eat plantain, we eat egusi soup. We like it a lot, but also the German side you know. We were brought up both ways.”

Since joining SV Hamburg’s first team, Jonas Davids has featured in all of the Hamburg-based football club and has put up solid performances in all the games he has featured him. This has earned rave reviews in the media across Germany.

Over the years, Germany has had Africans represent “Die Mannschaft”. leading this list is Jerome Boateng with Ghanaian heritage and currently, Anthonio Rudiger of Chelsea who was born in Germany but has his roots in Sierra leone. Jonas Davids wants to follow in their footsteps and direction but not the same route as it concerns international football. He wants to represent the Super Eagles of Nigeria.

“There is Jerome Boateng who played in Hamburg and there is also another guy called Jonathan Tah, he is from Hamburg as well and he played for Hamburg. He played his first season at Hamburg and then he went to Leverkusen. They both play in the same position as myself and they look a bit like me so I look up to them and try to kind of follow their way, you know, I mean they, they have a big career, great players and I would love to go not the same way as them but in the same direction. They represented Germany but I want to play for the country of my father, Nigeria. “

Jonas may have been born and raised in Germany and has never visited Nigeria, but has very close ties with the West African country. He listens to a lot of Nigerian music, eats Nigerian food so well, and is very proud of his Nigerian name (Chimezie) as well.

I mean, my dad’s from Nigeria and my mum is from Germany. We were raised in both cultures. Like the German culture and the Nigerian culture. We eat Nigerian food. We eat plantain, we eat egusi soup. We like it a lot. The food is one thing but also, I mean the music, the dances. I mean, they’re like viral you know, it’s like Nigeria is a big county. When I was young I didn’t know that Nigeria is that big but when you get older you can see all the people there, like also like Naira Marley, I like his music. I heard he is the king over there. I see on Instagram how the people run behind his car on the street. It is crazy. I like Burna Boy a lot but I think he is also very famous in Europe as everyone knows him. Yes, he’s like a big big player in the music branch. But also Davido and Wizkid. I like Nigerian music a lot, I listen to it often. and I think the African vibes and music is getting more popular. I see now German white people dancing to these songs. (Laughs) it’s crazy. I think it’s, it’s a whole new era, you know like the African people with their talent they get.

Also because of Instagram and social media in general, they are heard now, you know, and in the past, fewer people knew that there is so much talent in Africa. Now everyone can see and it’s like, it’s crazy, because they’re going viral they dancing, they are singing so good. I like it. I’m listening to Burna Boy a lot, but for me like Burna Boy is the best Nigerian musician but I think everyone is different, but I also like Naira Marley because it’s doing like, it’s a bit like the London vibe, you know. I like it a lot. I am a real Naija boy. It is a big part of me.

Jonas says, while he hopes to get a call from Coach Gernot Rohr, the Nigerian national team manager, he would focus is on staying fit and continuing to do well at Hamburg with the hope of helping the club regain promotion to Bundesliga.